Councillor William Agar (1767-1838) is notorious as a man who did everything in his power to frustrate the building of the canal. Unlike some other land-owners, he is not commemorated by having a lock named after him!

Visitors to the London Canal Museum are often intrigued by the character of William Agar, who opposed the cutting of the Regents Canal through his land. Was he simply a NIMBY (Not in my backyard )? Or did he purchase the lease of Elm Lodge with the intention of suing the Company for as much compensation as he could get? The late Alan Faulkner, who meticulously documented the saga, sums it up as follows: In retrospect the dispute seems barely credible. Agar took his claims to absurd lengths in his self-appointed role as professional litigator. While the company was not entirely blameless at times, it was dealing with an individual who was unreasonable and motivated by greed; an experience it could well have done without . (Alan Faulkner, The Regents Canal, Londons Hidden Waterway, Waterways World Ltd, 2005) 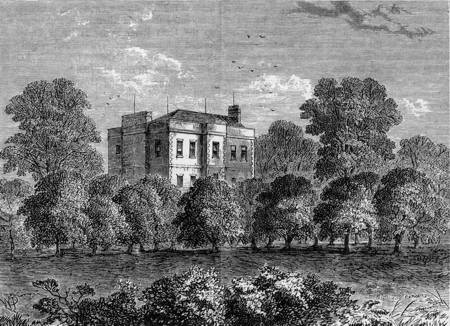 There is no doubt that, to the Regents Canal Company, Agar was an unmitigated nuisance. But what really motivated him? Certainly he was different from the gentlemen of the Regents Canal Company. He was from Yorkshire, while they were mainly from the south; he had embarked on his career somewhat late in life (He was assigned by his widowed mother as an articled clerk at the age of 20, still a minor, if only just). Although he was from an aristocratic family, he may have known hard times. He certainly seemed to have a grudge against the engineer James Morgan, whom he regarded as a mere employee of an architect. But none of this is sufficient to explain his sheer persistence.

Agar was a high-flying Kings Counsellor- and he was not short of money by the time he took on the Regents Canal Company. There is a little-known aspect of Agars life which possibly sheds light on his obsessive campaign to extract money from the Company.

On 5th November, 1838, in the seaside town of Hastings, William Agar passed away peacefully in his sleep at the age of 72. Even allowing for the exaggerations of obituary writers, he was a much-loved figure, generous, sympathetic and with a burning love of justice. We can add to that courageous and idealistic. It seems that while he was obtaining compensation money from the Regents Canal Company, he was giving much of it away to the small, embattled Unitarian Church - funding a new balcony here, renting a building there, establishing premises in fashionable Sloane Square in the hope of raising his churchs profile and, later on, supporting branches further afield in Brighton. This was indeed the act of a brave idealist- in his lifetime it had been a criminal act to preach Unitarianism, and it could potentially have damaged his career to have been associated with such a radical cause. Unitarians were regarded with suspicion by the establishment, having supported both the French and the American Revolutions and opposed the slave trade. So William Agar was no ordinary miser- he was, quite literally, a man with a mission.

He did not, however, leave a fortune to his church. It was his wife, children and grandchildren who inherited handsomely- and he also left them shares in the Grand Junction Canal. It seems that he was not entirely against the idea of canals. It is probably unlikely that he ever wished to stop the building of the Regents Canal outright - a defunct canal would have been of no use to him at all, and, indeed, when it was eventually built, he insisted on having his own wharf. If you visit the Camley Street Natural Park, not far from St Pancras Station, and stand near the waters edge, you will be standing near the site of his wharf, on what remains of his land.

The Museum is extremely grateful to the historian Howard Hague, who generously gave his time to checking the Unitarian records for traces of William Agar. Unfortunately all that remains, apart from the obituary, is a reference from the Brighton congregation to him as a London gentleman who was willing to top up their funds if necessary. It seems that his reputation as a fearsome litigant was to prevail over his philanthropy. Here is the link to Agars obituary in The Christian Reformer. There are many of his descendants around to this day - the Museum would love to welcome them and to hear their opinions on their controversial but brilliant ancestor.

A photograph of William Agars grave may be found by following this link to the website, Find a Grave