What is an ice well? In the days before ice could be made artificially, ice formed by nature had to be stored for as long as possible. The best way to store ice was underground in circular pits or wells, protected from sunlight, where ice could be packed together in quantity. This minimised melting and maximised storage time. Small ice wells are often found in the grounds of large country houses. Commercial ice wells on a much larger scale were built in big cities to store ice imported from colder climates. The two ice wells beneath what is now the London Canal Museum are, so far as we know, the only such wells in preservation to which there is any degree of public access. 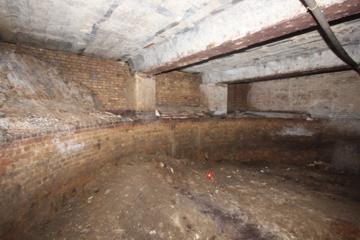 The ice wells were built in approximately 1857 and 1862 for Carlo Gatti, an immigrant from Switzerland, who came to London to make his fortune, and did so. Gatti was in the catering business and he realised that there was money to be made by supplying ice. In the days before artificial refrigeration, ice was in demand for food preservation, for chilling the drinks of the wealthy, and for relieving sprains and inflammation in hospitals. Before anesthetics, ice was even used to dull the pain of amputations! The main demand came from merchants dealing in meat, fish, and dairy products. Ordinary people did not have ice at home, as it was too expensive. Ice had been imported from the United States in the earlier years of the 19th century but Gatti used ice from Norway, where it was formed by nature in the mountain lakes of that cold country. The ice was brought by ship to London and from the docks travelled by horse-drawn canal barge to be stored underground and overground in the building that is now the London Canal Museum. Two huge brick-lined wells were constructed, thirty feet in diameter, and around 42 feet deep. Ice was packed into these wells in large quantities and could be stored for months, losing only about a quarter of its weight between Norway and the customer in London whose supply was delivered from this building by horse and cart. 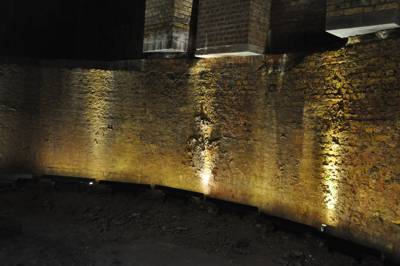 About the Ice Well

The wells were used for storage of natural ice until 1904. By then, ice could be made in London, due to advances in technology. So the natural ice trade declined swiftly and Gatti's company converted the building into a horse and cart depot, installing new floors and making extensive alterations. The man himself was by this time back in Switzerland, resting in his grave. The ice wells beneath the museum are not the only such wells to have survived but they are believed to be the only commercial-scale ice wells in Europe that you can see today. Other wells are buried and inaccessible.

One of the wells at the museum may be seen from above through an opening. This well is lit. The other well cannot be seen from the museum galleries, other than by viewing the image from our web camera.