Ice Well Conservation 2100 was a major project to carry out essential repair work to our historic building and to enhance public knowledge and appreciation of the ice trade. It was funded by the Heritage Lottery Fund and by the museum's own resouces. The project combined a "hard side" of physical building work on site with a "soft side" of public education and increased opportunities for the public to get up close to a unique part of London's heritage and learn more about the forgotten ice trade.The project value was £139,300 of which £99,300 was funded by the Heritage Lottery Fund and £40,000 is funded by the Canal Museum Trust (the charity behind the museum). It is forecast that, in fact, the Trust will have contributed around £50,000 or more to the project in cash and a further amount in non-cash contributions such as volunteer work, use of premises etc. by the time all the final work is completed.

The most major element of the 2013 project a works project to undertake structural repairs in the basement of the building. There were two elements to this; the replacement of pillars that support the ground floor, and repairs to ailing concrete on the soffit, or the underside of the ground floor. 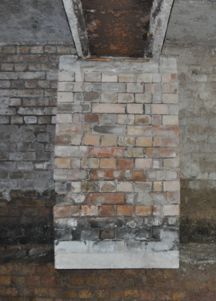 Three deteriorating brick-built pillars, that support the floors above, were replaced. The ground floor of the museum is a suspended floor constructed in 1904-6 from steel beams and concrete. It is supported on eight pillars, originally all brick-built, mounted on the top edges of the two ice wells, four per well. The first floor is supported on pillars too, and these are also seated on the edge of the wells and pass through the ground floor. You can see the supports for the first floor when you are walking around the ground floor of the museum.

The three pillars on the north side of the western ice well were showing signs of deterioration and one in particular was beginning to crumble and crack. In the long term, if not remedied, this would have led to a serious structural failure. The cause of the deterioration is not known with 100% certainty but is thought most likely to have been due to sulphate expansion of the mortar. The mortar may have a high sulphite content and be exmpanding as damp has penetrated the piers over many years. The damp is due to slow but stready leakage from the canal into the wells - a separate problem that must also be addressed in the future. 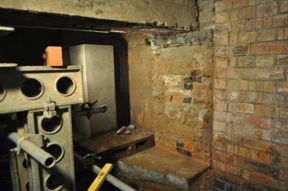 The 2013 project saw the three piers or pillars that were in the greatest need of replacement demolished and replaced. Two were replaced by brick-clad re-inforced concrete piers that were pre-cast, with steel reinforcement, on site close to their final location. The huge beams above were supported with large props and a hydraulic ram, and then the old brickwork was demolished. The new concrete piers were slid into place and mortared in. Then the propping could be removed, and finally, brickwork was built to give the new installation a similar appearance to the old. 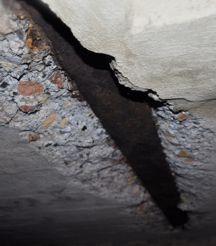 "Soffit" means the underside of the ground floor. If it were plastered and finished we would call it a ceiling. We needed to do some work on this because this iwas also affected by the damp conditions in the wells. Over many years, damp has penetrated into the concrete and this has caused corrosion and expansion on the surface of the steel beams and joists that are compnents of the floor itself. The expansion has forced the concrete to crack and pieces have broken off and fallen into the ice well below. Our project removed the loose concrete, cut it back as necessary, and cleaned and treated the steelwork that was exposed. Rather than applying new concrete we left the steel exposed and treated it with a preservative coating based on zinc.

We are planning to dramatically improve the lighting of the wells by introducing a new LED lighting scheme. This will provide for much-improved lighting to the circular walls that will bring out their textture and help visitors to understand their construction. In addition, additional funds are being provided by the museum to facilitate decorative lighting that will provide an attention-grabbing showpiece for private functions and special events. Simple lighting is also to be provided in the eastern ice well.

A demonstration model unit was made for use by our education team that shows the science of how ice cream was made in the 19th century. This unit is a replica of an ice cream maker patented by Mrs Agnes B. Marshall, sometimes known as the "Queen of Ice Cream". The museum now has an original machine in its collection, although the replica was modelled on one loaned from a private collection.

In addition a programme of talks, workshops and visits to the well took place during 2013.