Ferret and Ilkeston are boats in the national collection, housed at the National Waterways Museum, Ellesmere Port. London Canal Museum sponsors the maintenance of these boats in partnership with the National Waterways Museum and the Boat Museum Society. We provide funds to enable the BMS and the NWM to work together on the maintenance of the two boats. The partnership helps with the difficult task of maintaining a fleet of historic boats for enjoyment by future generations.

History of the Boats 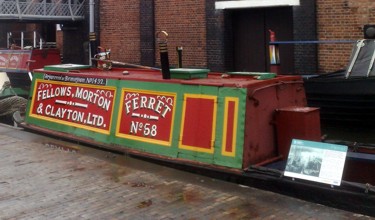 The motor narrowboat Ferret was built by WJ Yarwoods of Northwich in 1926. She worked for Fellows, Morton and Clayton on the Birmingham Canal Navigations (registration no 1231; Birmingham registration no 1492). She was paired originally with the boat Urmston. Ferret is of composite construction, with wooden bottoms and steel hull sides. She is powered by a 15hp Bolinder engine and has a cargo capacity of 30 tons. The photographs show Ferret in late 2008 and late 2009 at Ellesesmere Port. 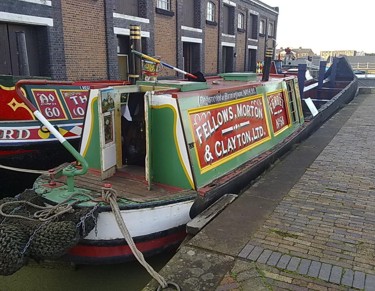 Ferret was craned out of the water in 2015 as she was in need of major repairs. The cabin, which was not original, was largely beyond repair but the parts of the cabin have been retained, as has the engine. The hull has had significant work done to safeguard it. 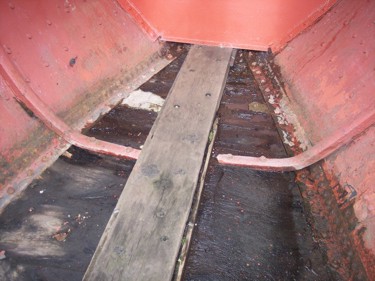 The interior of Ferret's cargo hold. The condition of the steelwork and the timber bottom planks was becoming a cause for concern. 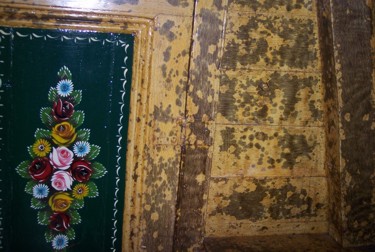 The interior of Ferret's cabin in 2010. The traditional striped painting of cabins had deteriorated considerably.

Ilkeston was built as a horse boat in 1912. For 33 years Ilkeston travelled the canals carrying all sorts of cargo until, in 1945, she was sold to the Bridgewater Department of the Manchester Ship Canal Company for £344. With her cabin and gear removed, Ilkeston was used as a mud boat on dredging operations on their Bridgewater Canal. She was renamed Mud Boat No. 3 (MB No.3), also just plain No.6. 1975 saw Ilkeston sold to Tim Wood and kept at Bull’s Bridge Basin, where an extended back cabin was added to increase the living space. Use for a while as a camping boat, later being sold to a family from Nottingham in 1980, paired with ex-FMC steamer Vulcan, and used as a home. 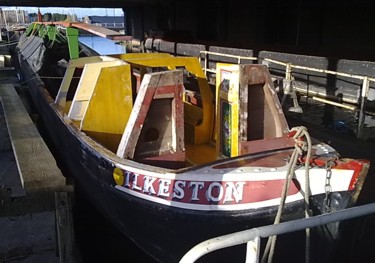 When the wooden bottom eventually became unsound and leaks were making life unpleasant, in 1987 she was sold to Nottingham Canal Museum. A restoration to its original condition began with the renewal of all the bottom planking and the removal of the forward cabin. The boatman’s cabin was renovated and repainted on the outside in the original Fellows, Morton and Clayton livery. Following closure of the Nottingham Canal Museum, the boat was transferred to the Boat Museum, Ellesmere Port, in 1999. A considerable amount of renovation work was done on Ilkeston and, after extensive research into similar horse-drawn narrow boats, running blocks were added to take the towline to a T-stud in the back cabin roof (through the framing at the front of the slide hole). This allows the steerer full control over the towline. In the years since 1999 the boat has deteriorated and now needs significant work, primarily on the cabin. 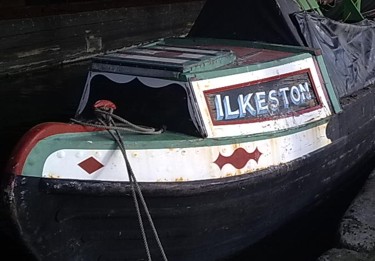 The pictures above in this paragraph show Ilkeston in 2009 at Ellesmere Port, where she is seen protected in covered accommodation but in obvious need of maintenance work. 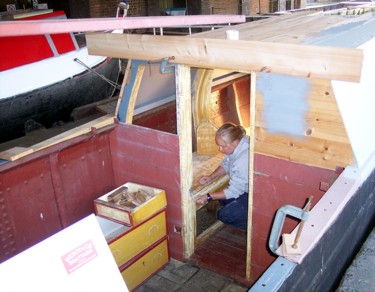 An apprentice in the Heritage Boatyard scheme is seen working on the cabin of Ilkeston, September 2010. Ilkeston's cabin was undergoing a complete restoration at that time and new timbers can be seen in the picture. 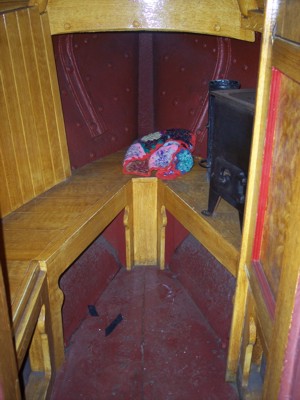 Ilkeston has a small forecabin, which is in reasonably good condition. The interior is shown here in 2010. A forecabin would have been used as sleeping accommodation, often for children.

With restoration largely complete, Ilkeston took part in a centenary journey to London Canal Museum in 2012, arriving on 23rd August to a huge welcome. She was horse-drawn through central London and watched by large crowds, before arriving at the London Canal Museum to the sound of a brass band.

Following a month's stay during which visitors were shown around the cabin, Ilkeston returned north to be displayed at Ellesmere Port. The outdoor conditions have taken their toll on the paintwork and further work is now needed, together with additional work on the boat's bottom.

London Canal Museum is financially healthy but has no resources of labour, expertise, management or facilities available for the upkeep of historic narrowboats. Our role in the partnership is limited to a financial support role, sponsoring materials and other expenses of restoration and repair of the two boats. The Boat Museum Society has an incredible team of dedicated volunteers who support the National Waterways Museum in many ways, including a substantial commitment to practical maintenance and repair work. The National Waterways Museum, part of the canal and River Trust, owns the boats, provides curatorial guidance and manages the site and the overall programme in consultation with others.

By coming together in this partnership, we can ensure that these historic boats are preserved for the future benefit of the public and remain well cared-for in the national collection for many years to come. 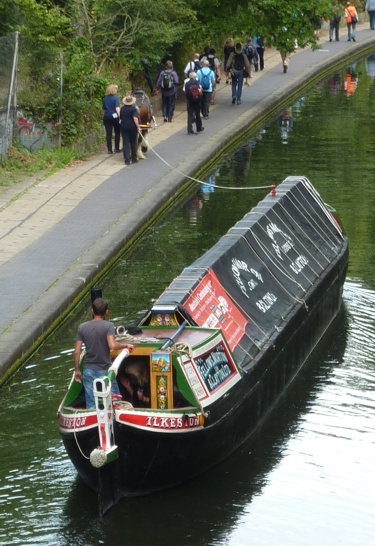 In June July and August 2012, Ilkeston made a centenary journey from Ellesmere Port to the London Canal Museum, to celebrate its restoration, its centenary, and the partnership between museums that had helped to make restoration possible.

The day of arrival was 23rd August 2012 and a day of great celebration. The museum's tug Bantam IV towed Ilkeston from near Greenford to Regent's Park, and then a horse called Buddy took over and towed Ilkeston to King's Cross, accompanied by the media and many well-wishers. At the museum, there was a big welcome with a band playing, and 100 helium balloons were released from her hold as she approached the museum. The boat stayed at the museum until 24th September. 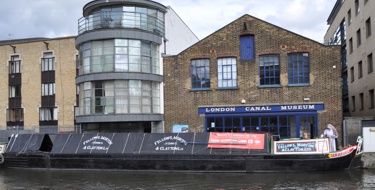 Ilkeston on display at London Canal Museum in summer 2012

Ferret and Ilkeston in 2016

Ilkeston has been on outdoor, floating display at Ellesmere Port since restoration in 2012. This has enabled many visitors to see the boat but the harsh environment of English weather in an exposed location has had its effect and the paintwork is deteriorating again. Further work is needed to the boat's bottom to prevent leakage from the canal. 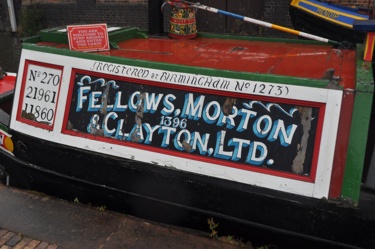 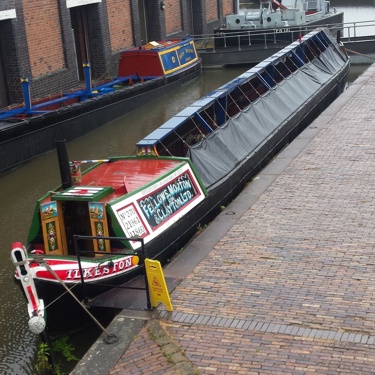 Ilkeston on display at the National Waterways Museum, August 2016

Ferret remains in pieces on dry land. The hull has benefitted from significant protective work such as rust removal and painting, but these works are incomplete. The engine is in store indoors, but the cabin is in outdoor storage. The cabin interior was not saved. 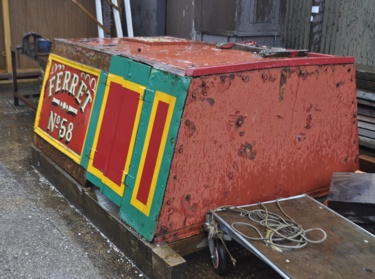 The cabin of Ferret is currently in outdoor storage